Fans of Photo Story Magazines from years gone by, such as Ruiter in Swart, Grensvegter and Wit Tier, will be interested in “Die Avonture van Malboer”. This new six-issue series brings Photo Story Magazines back into print in the 21st Century! Written by Johan Jack Smith, from the band Volkspeler, each issue has 60 pages.

An adults-only publication, which features the hero Ignatius “Malboer” Bierman and his sidekick Sannie Greyvenstein.  Malboer is tougher than tough (ex-Koevoet operative and SAP-Detective), in a style reminiscent of DC Comics’ Preacher comics. Set in post-apocalyptic South Africa, Malboer wields his duo of Berettas “Kombuis” and “Kerkorrel”, in a bloodthirsty tale of vengeance, hunting down “The Firm” (those responsible for attacks on his family).

The Book’s Motto:
Volksvervlakking is 'n siekte. Ontmoet die kuur.
(Brainwashing the Masses is the disease. Meet the cure.) 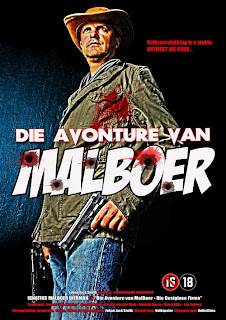