Great Thanks to Nick Wood for this insightful article on Mighty Man (Afri-Comics 1976-1978):

I've been a comic book reader since I grew up in Zambia and then South Africa during my teens and beyond. Due to the vagaries of international distribution at the time these were mostly super-hero comics, imported from the far shores of the United States of America, although alongside these came a smattering of British comics such as Tiger and Hurricane, The Beano and Dandy. Television in South Africa had been effectively banned up until a tightly censored state broadcasting (SABC) was launched in 1976, so comic books were a constant early teens 'companion' for me.

During this time I crystallized an identity choice - as regards comics, I became a 'Marvel Man' - i.e. I decided Marvel was 'better' than DC - for me at least, their comics felt younger, fresher, more (with adult hindsight - perhaps 'pseudo') scientific. Some of the favourite titles I used to devour after school in my local C.N.A. (South African newsagent) were Daredevil, Amazing Spider Man and ... Luke Cage, Hero For Hire.

Luke Cage was an interesting anomaly to me, a powerful black American hero, but I was reading his exploits in a country where black people had been colonized, impoverished and segregated into ghetto townships, away from peacefully privileged white suburbs. As I saw it, the height of black aspirations for those traveling in from the townships were as a maid or a gardener, dependent on their gender.

Little did I know then, that about this time (1975), black South Africans had been 'supplied' with their own super-hero, a Luke Cage Power Man equivalent, or a prototypic Superman, who could leap tall buildings, but not fly. ‘Mighty Man’ he was called and he seemingly ruled the streets of a township modeled on Soweto - but perhaps unsurprisingly given the comics’ American genesis, a place - that to me at least -somewhat resembles a generic US city.

A locally oriented comic was in itself not a new phenomenon. South Africa by the seventies had a relatively long history of photo comics - realistic comics sequenced by actors photographed in set up scenes, panel by panel, with added speech or thought bubbles inserted. (Some good examples of these can be found on this blog and are similar to the Latin American fotonovelas, on which they were based: Mason, 2010). These photo-comics had specific marketing niches - there were stories with black characters targeted towards black South Africans, such as ‘Super Mask’ and ‘Flash.’ In addition, there were comics for white South Africans, divided by language; some English titles being ‘Kid Colt’, ‘Mark Condor’ and ‘Tessa’.  Afrikaans stories were represented by titles such as ‘Die Swart Luiperd’ (The Black Leopard) and ‘Grensvegter’ (Border Fighter).

At the time there was a slightly snobbish attitude towards these books, but my adolescent brain was not too discerning. My personal favorites were Kid Colt and Tessa - who seemed to do most of her fighting in a bikini and high heels. (Modesty Blaise was a no doubt much better alternative in the Cape Argus, but moved at an agonizingly slow pace of 3 newspaper frames a day --- and she didn't seem to wear a bikini often enough, for my young and obviously sexist brain at the time.)

So the introduction of Mighty Man was not a novelty in itself - what earmarked him as different was that he was an illustrated super-hero, a more expensive, swanky alternative to photo-comics. This was in a market where South Africans had hitherto only published overseas reprints - such as DC comics in rebranded local labels such as Mimosa in the 1950's and 1960's - or Supercomix for the 1970's local equivalent of Marvel. (Again, some wonderfully evocative examples can be found on this blogsite.)

Mighty Man was targeted towards - and published in - the townships under the rubric of 'Afri-Comics', branded as South Africa's own equivalent of Super Man. Early issues in the series were subtitled: 'The Human Law Enforcing Dynamo.' The problem was, of course, that at that time the main thrust of laws in South Africa were apartheid laws. 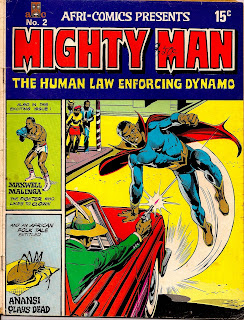 But Mighty Man (MM) never challenged any agencies or laws outside the township in which they were set - ostensibly Soweto. A black hero seemingly meant exclusively for black people, his enemies were township gangsters ('tsotis'), drug Lords ('dagga merchants') and generally opponents of peace and 'law and order'. As Bill Mantlo (1978) states, Mighty Man propounded subservience to laws, non-violence and an anti-gun message (for blacks). With readership targeted to the townships and perhaps priced to ensure affordability to a relatively impoverished community, it was evident Mighty Man was implicitly intent on ensuring compliance to laws - with the underlying message that opponents of 'law and order' were invariably gangsters, murderers and, in some instances, 'communists'. (As Mantlo asserts, a thinly veiled allusion to the then banned African National Congress.)

Mighty Man’s origin gets briefly recapitulated in the 2 issues I have. Not surprisingly, he’s an ex-cop (‘Danny Ndhlomo’), who gets shot by ‘supermarket thieves’ which (in the words of MM) ‘ended my law enforcement career…until a strange race of creatures living in a hidden underground cave treated my wound, which also changed me into…MIGHTY MAN…the Strongest Man in The World.’ (Mighty Man 5, p.3). In his new empowered guise, MM carried on his fight against (petty) crime.

But when 1976 arrived all hell kicked loose in South Africa. Hector Pietersen was shot and killed by police as students protested against the compulsory teaching of Afrikaans in Soweto schools. Protests spread rapidly across the country. Standing outside in the garden of my Pinelands (white suburb of Cape Town) home at night, I could see a red skyline with plumes of black smoke rising into the sky, seemingly stemming from burning buildings and schools in nearby Athlone, Langa and Nyanga; no doubt fueled by tear gas and bullets from the police and army on the ground. To me, even in my cushioned environment, the exploits of Spider Man seemed suddenly very far away.
(But as for Mighty Man in 1976, he only continued his fight against 'internal' township enemies.)

The year after the Soweto uprising, the Black Consciousness leader of COSAS, the Congress of South African Students (Steve Biko) was murdered. This was 1977 and I was heading towards the end of my schooling. Faced with the eventual possibility of compulsory military service on the 'border' - i.e. 'defending' against SWAPO or ANC 'terrorists' near or inside the Angolan border, I gave up reading comic books altogether.

As for Mighty Man, Weissman (1978) goes on to tell the irony of him being 'killed' by the very people he had claimed to defend. “They burned down the newsstands,” complained the creative originator of MM, Richard Manville, “They threw the things on the ground and we had to stop publishing them.” And so it was, that Soweto 'rebels' in 1977' finally forced Mighty Man to his grave - although a local MM film was indeed subsequently made in 1978.

Mantlo said that in the issues he had read, no whites appeared within the segregated 'reservation' settings that he could see. I spotted one in my issue of Mighty Man 2, picked up when I started reading and collecting comics again in the 80's. It's a white medical doctor, flanked by a black nurse in the hospital where kids have been poisoned by the evil 'Johnny One-Eye'. Tellingly perhaps, career aspirations were perhaps also explicitly being mapped out  (or modeled) in comic form for young black readers?

So what was Mighty Man's back-story? Weissman (1978) and Pitterman (1977) indicated that funding for the comic had come from a group of Republican Americans, including the media magnate John McGoff - and was developed by Richard Manville, a New York marketing consultant with clients in South Africa. Manville had sold the idea to J.Van Zyl Alberts in South Africa, who ran the pro-government newsweekly 'To The Point'. Manville had developed the stories with a team of free-lance cartoonists, which apparently included Joe Orlando, who had said: 'there were certain guidelines...Like not screwing around with the government.' Orlando had wanted the comic to include one-page outlines of heroes for black readers to identify with, such as the slain leader of the anti-Portuguese struggle in West Africa's Guinea-Bissau, Amilcar Cabral. Not surprisingly, this idea was turned down and extra short strips run were instead about African folk stories such as 'Anansi Plays Dead' and black soccer players in local leagues.

Who knows, perhaps if the magazine had followed Orlando's suggestion, it may have escaped its fate? (More likely however, is that it would have been censored or stopped by the government at the outset.)

I've hit a half century now and it's been a very long while since I've considered myself a 'Marvel Man'. In fact, I tend to read very few super-heroes comics generally. My comic/graphic novel reading habits lean more towards 'indie' work on the whole, such as Sartrapi's 'Persepolis', Kleist's 'Castro' or Dysart’s ‘Unknown Soldier’. (For a brilliant DC short story however - written by Lauren Beukes - look no further than the recently published Vertigo Imprint, Strange Adventures (number 1: 2011), entitled ‘All the Pretty Ponies’.  Lauren is spearheading the South African speculative fiction wave, flanked by Sarah Lotz in her multiple and partnered guises, with writers such as Andrew Salomon, Tom Learmont, Nerine Dorman, Charlie Human and others, coming to the crest.)

But as for me - since 1976 at least - I haven't read many out and out war comics - Dysart’s nuanced Ugandan setting has won me over again, at least to some extent. I might be persuaded even further if I can track down a copy of 'From Slavery to Freedom', a comic book account of the Angolan Civil War, published resonantly in 1976 as well and produced by the MPLA - who had fought successfully against Portuguese colonialism and  - aided by the Cubans - against a South African invasion late in 1975.

And as for Mighty Man, I'm aware I have skipped very lightly through his pages - I own only 2 issues of what may now be a rare comic and am further distanced by the 'existential chasm'  (Mason, 2010) that existed in 1970's South Africa between most black and white people. I would really value comments from someone who may have read MM’s exploits at the time - perhaps in Soweto or Alexandra or Langa - who may even be accessing this blog right now. If you have read Mighty Man all those years ago, hot off the press as it were, I'd love to hear your impressions - or, perhaps you may have seen the 1978 movie, apparently made in isiZulu? 'Mighty Man' is indeed a part of our complex and fraught history and may still have more stories to tell, even beyond his grave?

Mighty Man 5 Front and Back Cover Retro Ad for Niknaks: 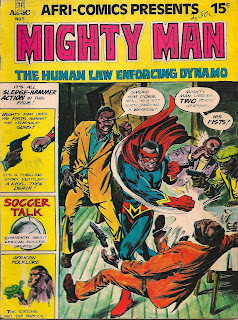 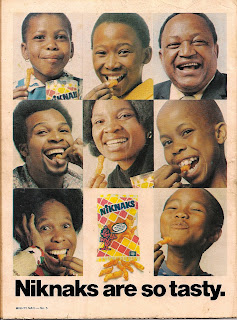 For a wonderful account of cartooning in South African history - with some coverage of South African comic books too - look no further than Andy Mason's (2010) 'What's So Funny?' Andy also has another incarnation as ND Mazin, co-founder of ‘Pre-Azanian Comix' in the 80's, of which I have 4 of 6 issues published (1982 - 1987). A few covers of PAX are included in this blog, with due credit to the Durban Comics Circle of the 1980's in South Africa.

Thanks to Supercomix Collector Ravi for these great scans of the interior of Mighty Mouse 3 of the South African reprint series.
Contact Me or Ravi if you have any Supercomix for sale:
NaidooRavie@elec.durban.gov.za

Cover of Issue 3 and Back Cover Retro Superman Ad for Milk: 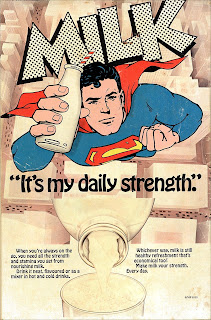 House Ads for Hulk and Popeye: 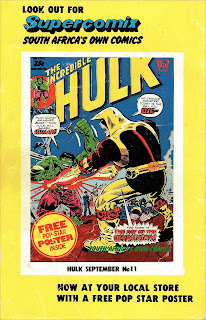 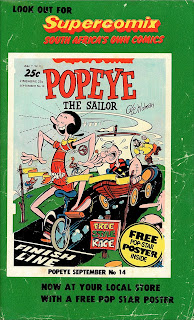 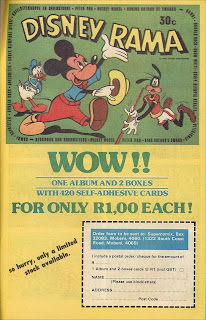 Thanks Leslie for this great cover of South African Mimosa Comics' Superman 1 Giant Edition (1962) from the Michigan State University Collection. 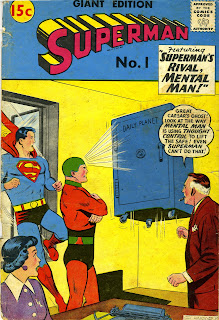 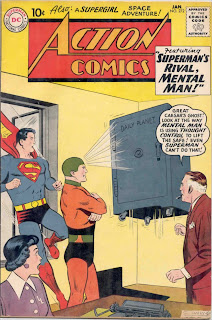 Thanks Leslie for this great cover of Kongo Koot Strokiesverhale #3 from the Michigan State University Collection. 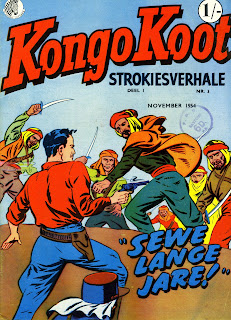 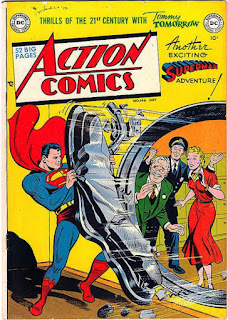 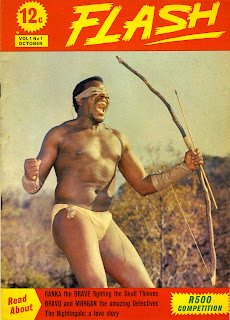