In 1982 Colin Penn Promotions (Durban) produced this great album & trading card set. The album has 70 famous DC and Marvel characters. These were card-stock cards with a description of each character on the rear.
These were great fun to swop when we were kids. This is a copy of my album. Wonder how many still have theirs from 1982? Or did your mom throw all your stuff away when you left home to go to university ... 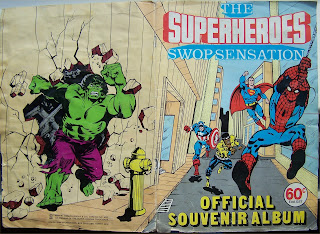 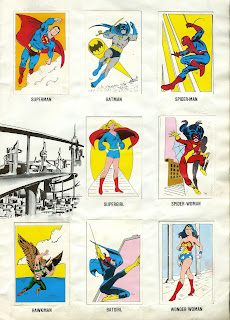 The centre pages of the album promoted some gifts to buy - would be great to find some of these ... 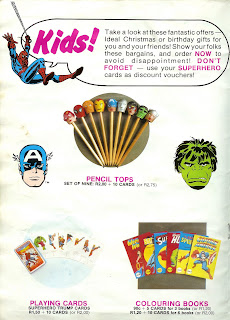 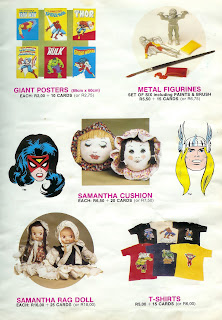 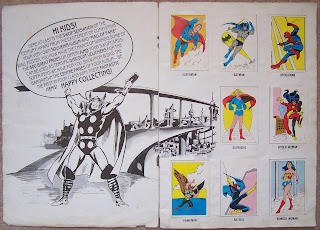 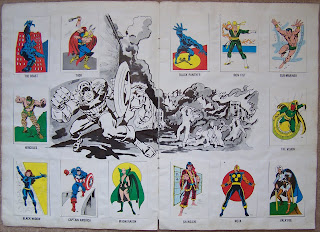 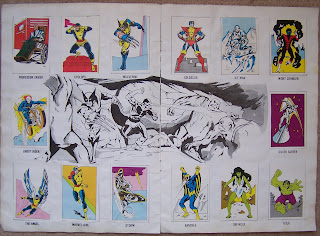 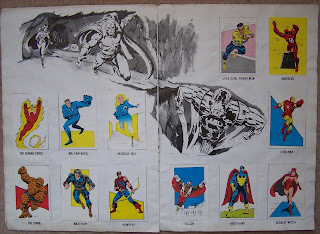 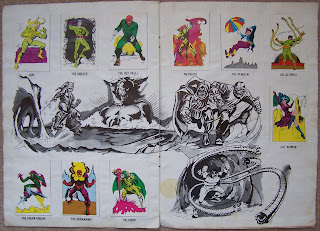 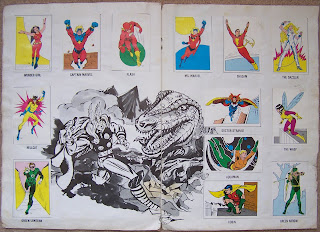 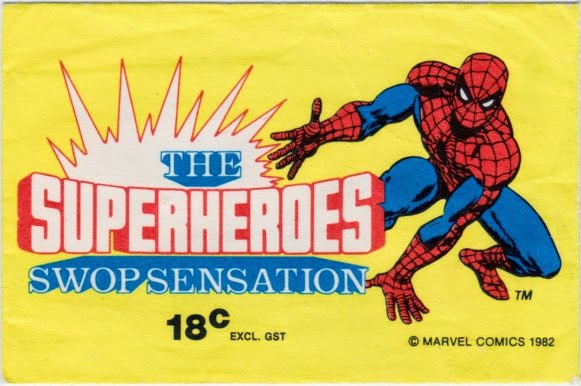 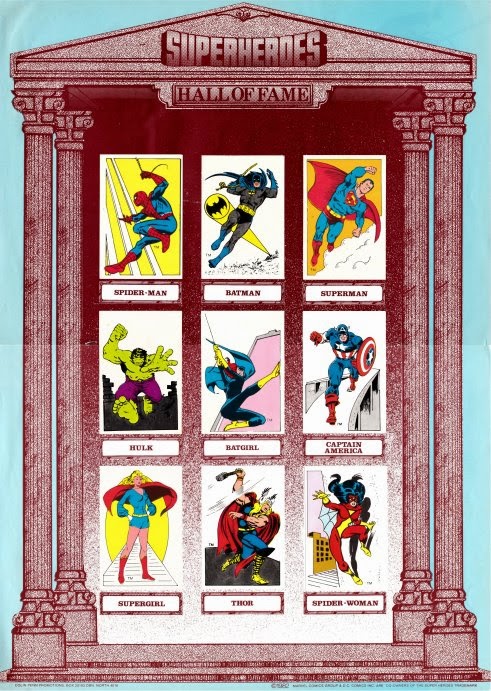 Thanks Seth for these pictures of the Order Form:

CLUE CARDS:
Clue cards - a subset of 20 cards from this series. The cards were one-sided, the reverse side was blank: 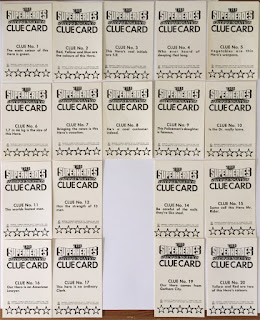 If anyone has any more Clue Cards, please e-mail me:
g.vdr26@gmail.com

IMPERIAL AND METRIC VARIANT CARDS:
Eighteen of the Marvel Cards have variants. There were different print runs, where some of the measurements listed on the backs of cards were printed as either Imperial measurements or Metric measurements.  These 18 cards were: Thor, The Vision, Cyclops, The Wolverine, The Angel, Marvel Girl, Storm, Colossus, Ice Man, The Night Crawler, Hulk, The Human Torch, Mr. Fantastic, The Invisible Girl (where the metric variant was misprinted as "The Invincible Girl"), The Thing, The Invincible Iron Man, Scarlet Witch, The Wasp.
Backs of these 18 Marvel variant cards: 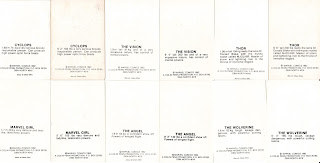 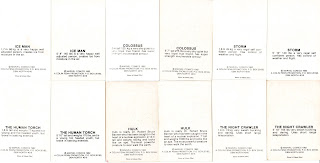 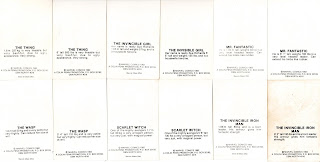 If anyone has any more Variant Cards, please e-mail me:
g.vdr26@gmail.com

The elusive Joker card  - I can only speculate which image Colin Penn used for this prized card ... this was the image of The Joker used most often in those days: 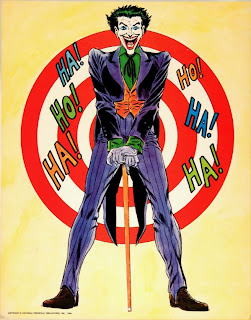 1. My friend Bobby Raucher (RIP) found the Joker card. His brother confirmed this to me last year in May 2011.

His brother Steven said that Bobby, as advised by Colin Penn promotions, sent the Joker card to them so he could get the free ride in the batmobile (ie get collected from his school by Batman and the Batmobile) -this promotion was televised on TV1 on the Video4/Video40 tv show hosted by Delia Sainsbury in 1982.

We presume as the promotion was over and the Hulk, Spiderman, Batgirl & a rather well-rounded Batman and the 1960's TV show styled Batmobile had already gone back home ie overseas....... Colin Penn Promotions could not keep there promise.

All Bobby ever got back from them was a letter saying sorry but unfortunately the promotion is over.
And to top it off...... they didnt send the Joker card back to him.

2. I met a guy who told me that as a kid in 1982 and based in Pretoria his dad found the Joker card for him and as a surprise didn't tell him. The dad sent it through to Colin Penn in order for them to organise that the Batmobile would collect him from school.
Colin Penn sent him a letter saying that the Batmobile had been sent back to US due to a malfunctioning engine. What he did receive was a letter and a large hamper of the goodies that were on offer in the catalogue in the middle of the sticker book like the pencil top super hero rubber heads etc.

Many Thanks to Charles for these pictures of a Superheroes Swop Sensation Wild Card ... Joker Card mystery solved, I think! 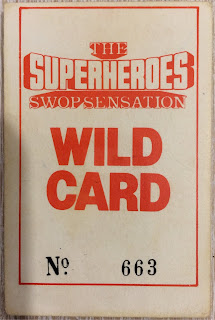 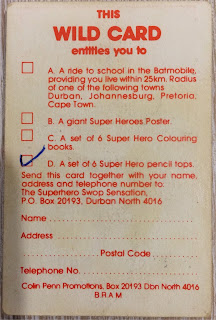 Many Thanks to Gorkyvark for this picture of The Spider-Man Club Certificate, also produced by Colin Penn in 1982: 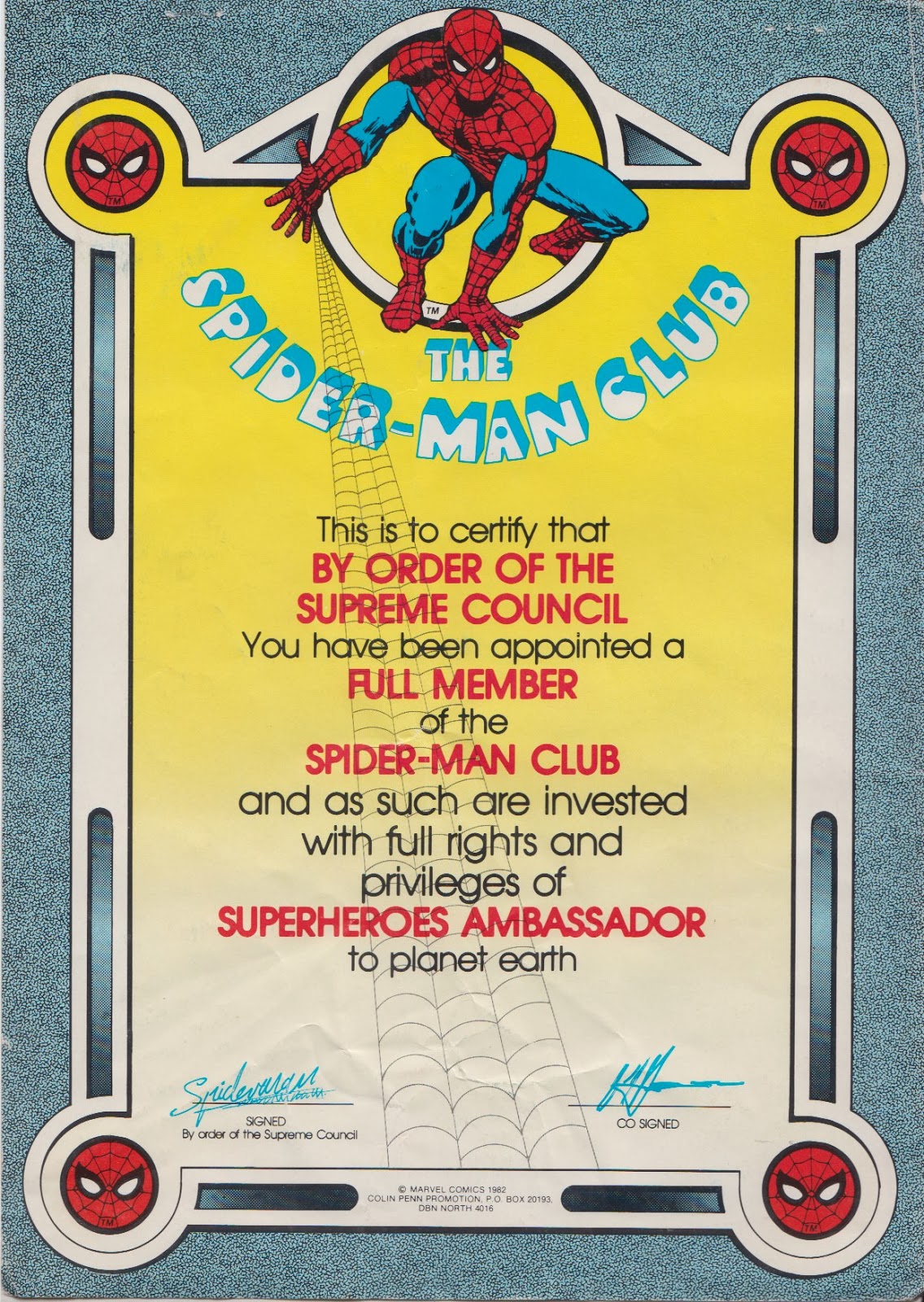 Many Thanks Pierre for this picture of two of the Superheroes Swop Sensation Pencil Covers: 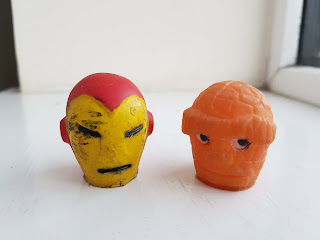 Superheroes  Colouring Books 1; 3; 5; 6 covers (as advertised in the centre pages of the Album). Each issue featured the images used for the cards: 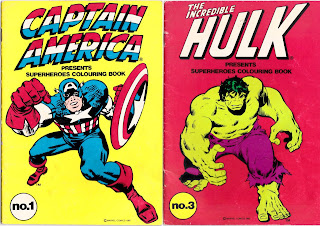 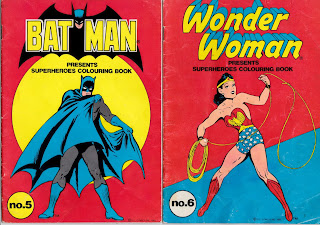 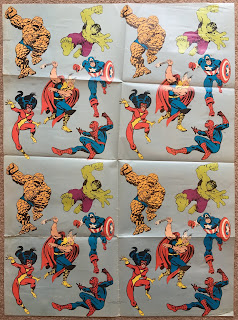 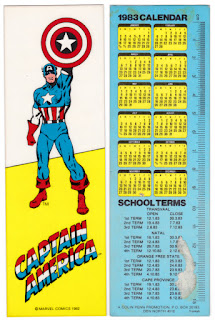