After all these years - a Photo Story Magazine brought back to life. The legendary South African fictional hero "Ruiter in Swart" rides again!

Ruiter in Swart - Rowers van Marula is a new film, only available on DVD. It is the first in a  series of films (six films planned), produced by Ruiter in Swart Produksies.

This film will appeal to fans of the original Ruiter In Swart series, Afrikaans film fans and nostalgia buffs alike.

Vonk De Ridder reprises the role on Ben (Ruiter in Swart) - the retired hero. He is called on by ZARP (Zuid Afrikaanse Republiek Polisie) to assist in helping to capture a gang of cattle thieves and weapons smugglers. He dusts off his famous black outfit - and rides to the rescue on his black stallion.

An excellent production - I enjoyed the acting, cinematography, music, theme song. Vonk De Ridder was truly impressive as the hero on his horse, and I especially enjoyed all the fight scenes. How wonderful to see this courageous hero, although many years have passed since his last adventure, still able to defeat the enemies and ride off into the sunset victorious. Reminiscent of all the great Cowboy films - but it retains a true South African charm - that will leave you with a lump in the throat.

I hope this DVD sells well - and I look forward to future volumes in this series. 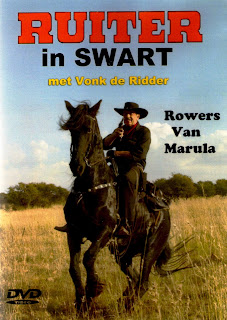