The second issue of Afri-Comics Mighty Man, published by Xanap in 1976.

Mighty Man battles Johnny "One Eye" and his gang, as they rob a bank. Mighty Man fails to capture them, but an incensed Johnny plans to rid the world of Mighty Man.


Johnny devises an evil plan to ensure Mighty Man's demise. He poisons a group of children, then issues an ultimatum to Mighty Man ... only after Mighty Man's death will he release the cure to the poison. As the children start dying, Mighty Man agrees to sacrifice himself.

Mighty Man promises to blow himself up, with bombs strapped to his body. In the seconds before the explosion, the doctor who created the poison lunges at Mighty Man - giving him the written chemical formula for the antidote.
Mighty Man heroically captures Johnny and his gang 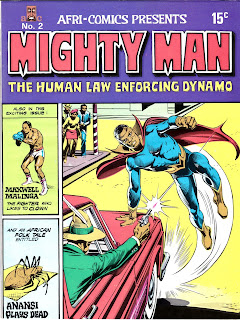 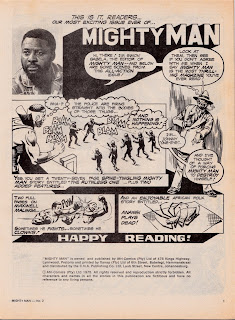 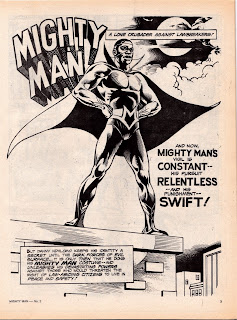