Also reprinted is this story from DC Comics' Batman 127 (1959):
"The Second Life of Batman"
24 pages, glossy colour cover, black-and-white newsprint interior pages.
These titles were printed in a smaller size (165x109mm) compared to the original DC Comics title.
The printing reproduction from the original was very good quality.

Here is the cover of issue 17: 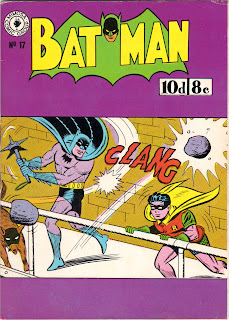